Since FvF’s international expansion, England’s dynamic and vibrant capital has offered a wide range of inspiring stories and young talents. Lilli Heinemann has been one of the main reasons for our great discoveries in London. Born in Berlin, this charismatic young lady and FvF contributor started her career with a degree in fashion design, which she completed in 2009. She left her hometown by chance to London and soon gained a – quite an unplanned – foothold in the city’s fashion industry. 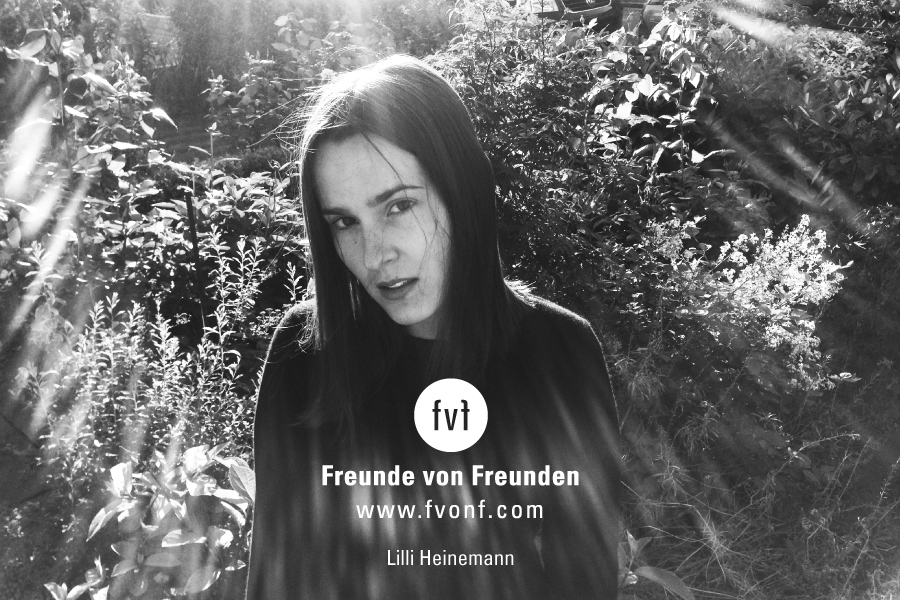 After a design internship at Vivienne Westwood, she entered the media business as editorial assistant and online contributor at Pop Magazine. Just one year later, Lilli became the features editor for the progressive concept store LN-CC while also assisting stylists Isabelle Kountoure and Vanessa Reid for publications such as Pop, V Magazine and L’Uomo Vogue. At the same time Lilli started building the FvF network in London, introducing us to a diverse artistic scene including artist Richie Culver, Hugo Tillman and Conor Donlon.

Following a temporary stay in Paris, where Lilli organized international screenings for the Holocaust documentaries directed by Philippe Halphen, she is now back in her adopted home of London. Here she is currently working at the agency A.I. doing PR for J.W.Anderson, A.P.C. Germany, and the aspiring design duo Marques’Almeida.  Read the following interview and find out about Lilli’s latest artistic discoveries and her sources of inspiration from Berlin, Paris and London.

What’s your favorite daily ritual?
Whenever I tried to integrate rituals into my life –such as going for a run before work at 7am- I failed massively.

What do you do when you are not working with FvF?
I am working as a fashion publicist with designers and brands such as A.P.C. and J.W.Anderson. I am also a freelance writer.

Where do you go when you want to relax or get inspired in your city?
I just moved into a new house with a nice garden and am very optimistic that I will be relaxing there and in nearby Victoria Park all summer. Inspiration is found easily just outside my doorstep.

How has technology influenced you?
I just got an iPhone after years of smartphone refusal so I guess I am a bit of a late adapter. I love being able to access information through technology wherever I am but find it worrying how dependent I am on technical devices and internet.

Best travel memory?
There are many, but I remember a very special vacation with a handful of friends to the French Atlantic for my first –and only- surf holiday. We went to the beach with a bottle of Champagne to celebrate my 18th birthday and on our way all the people we crossed started singing French birthday songs to me. That was nice! Especially considering just two days earlier I had to be rescued by two lifeguards, as I made the silly mistake to run into the water whilst there was a red flag warning…

Your latest artistic discovery?
My boyfriend is a book artist so he is bringing new ‘artistic discoveries’ home all the time. Recently he bought me a really funny book by Japanese photographer Ume Kayo called Danshi, which means ‘boys’. The book is a series of photographs of elementary school boys she met during her photography school days. I also just watched ‘A Knife in the Eye’, a documentary made about Belgian artist Michaël Borremans, that is amazing. Another discovery for me are the London based designers Marques‘Almeida whom I just started working with; a really lovely Portuguese couple, both Central Saint Martins alumni and extremely talented.

What was the last great meal you ate and where?
I had two really good meals recently: Kizami Atsu Atsu at Koya, a Japanese in Soho; and lots of tapas at Le Blah Blah, a charming restaurant in the 10th arrondissement in Paris. However, I find it most important whom I am sharing my meals with. Last week I was also introduced to Mezcal, a drink native to Mexico, at LN-CC’s Mezcal Bar opening.

Who would you like to see featured next on FvF?
I love to see all these beautiful flats and houses on FvF and get very jealous. Nonetheless I would find it extremely interesting to see more ‘ordinary’ people’s places featured. This would probably go beyond the scope of FvF’s concept but sometimes I am wondering how my Indian drycleaner or the angry bus driver I encountered this morning are living.

You lived in Paris, Berlin and London – what are your favorite things about these cities?
I adore the pâtisseries in Paris. When I lived there I couldn’t help but try every day new artworks of cake. Berlin is just great because it’s home; it’s calm, slow and there is always a fully stocked fridge! London is most exciting for me. It can be pretty exhausting, but there is constantly so much going on and so many amazing opportunities to work with very talented people, it is really hard to fault.

What’s your favorite thing about working in the fashion industry?
I was never planning on working in the industry – I got into it very naturally. I do love my job because it enables me to work alongside some very inspiring creatives and to meet every day new and interesting people.

Thank you Lilli for your wonderful input and for being part of the Freunde von Freunden network. Find all her FvF interviews here.

Run by women and powered by design: Juliana Rudell Di Simone’s metaverse is closing the gap between the digital and the physical world

Los Angeles Design Profiles
Profiles
Back to overview
We use cookies on our website to give you the most relevant experience by remembering your preferences and repeat visits. By clicking “Accept”, you consent to the use of ALL the cookies.
🍪 SettingsAccept
Manage consent