When she’s not working in the kitchen, Sophia Rudolph can be found at her office job for the Contemporary Food Lab. She merges her drive as a chef with the more conceptual and business sides of things.

Sophia Rudolph, originally born in Berlin, moved to Lyon with her parents aged thirteen. It was a move that would come to define the rest of her life. Though she planned on leaving France to return to Germany after completing high school, that didn’t pan out. She decided against a traditional degree, instead opting to take a more practical, less theory-based course. Studying at a private school, she learned to become a hotel and restaurant manager with vague plans of someday owning a hotel forming in her mind. But, the more she experienced culinary school, the more she enjoyed it. And she stayed in the kitchen. “The creativity agreed with me,” she says. Today, she is back in Berlin and working not only as the head chef of Panama restaurant but also for the Contemporary Food Lab as culinary director.

“I like extremes. And I think that appeals to people more than just serving something that doesn’t taste like anything but looks nice.”

Sophia is disarmingly open, yet one can’t help but feel that she’s guarding something. Her career is firmly rooted in traditional techniques, craftsmanship, and the importance of team spirit. Though Panama is a vegetable-heavy restaurant, it is not vegetarian. “We try and work as regionally as possible, for sustainability reasons alone we try not to buy produce from the other end of the world,” she explains. “That doesn’t mean we shut the outside world out as we’re inspired by different cultures. Berlin is so international, we didn’t want to restrict ourselves. That would be a shame. There’s not just one culture present here, it’s a melting pot. I describe our cooking style as new German cuisine with an exotic twist.”

One of the biggest takeaways from her time in France is to always put taste first. “It’s good to learn the classics, then you can develop going forward. Later, you see what you’ve built and perhaps consider breaking the rules. Or not,” she says. Another important French teaching tool is her respect for produce. Following the simple rule that if you have a good product, you don’t need much more. “For me, this is the French cuisine. I feel like other countries don’t pay that much attention to it. Everyone is fighting each other in terms of creativity and you end up forgetting what’s at the core: food is nourishment and it should taste good.”

Of course, people don’t visit her restaurant to try a simple pan-fried piece of fish; her dishes are far more complex. But she remains true to her teaching in that she insists that taste is the most important part of a dish. “One would think that most chefs respect this, but I often find when I go out that there’s something lacking. Food has to taste good. It must be well seasoned: a little bit of acidity, some heat. I like extremes. And I think that appeals to people more than just serving something that doesn’t taste like anything but looks nice.” Perhaps the most French thing about her is her love of sauces. “No matter, fish or meat, I love a good sauce. If the sauce is meaningful and tasty that’s great and what I love about food,” she says.

We as a culture have come to romanticize the kitchen. Late nights, high temperatures, charismatic people churning out beautiful food. There’s so much more to the bone-breaking job of being a chef, though. What first appealed to Sophia is the fact that, when working in the kitchen, you’re confronted with direct results. “In the best case scenario you have a wonderful piece of produce, you make lovely and creative dishes, and then hopefully you feel a sense of achievement by getting feedback from your guests,” she says. There might be cooks who will remain in the kitchen their whole lives, but that’s not what Sophia is looking for. “The more responsibility you have, the less time you actually spend in the kitchen. So the emotional part of handling the food gets a little lost along the way because there are other things that require your attention on a daily basis.”

As Sophia splits her time between the kitchen and managerial duties, she needs to run a tight ship and effectively balance her time: “The more you’re in the kitchen, the more inspired you are. Sure, you require the other side as well. Eating out and reading about things. But I find that when I’m standing in the kitchen, handling produce, I’m tasting something here and the produce is right in front of me. That’s when I’m so inspired and brimming with new ideas.” And yet, in the heat of the moment, when a kitchen has to run smoothly and up to 150 guests need to be served at Panama, other things are the priority: “Usually, that’s not the time to implement a new idea. With our team then, I have people supporting me who I can tell the idea to and who can go about experimenting. That’s really the only way it works, especially if you’re in the office a lot during the day.”

“The more you’re in the kitchen, the more inspired you are.”

This office job entails a lot more than merely logistics for running a restaurant. At the Contemporary Food Lab, they develop new concepts for restaurants or improve existing concepts. If, say, a museum wants to freshen up its gastronomic services, the Lab would be a place to go. Sophia explains: “We figure out the culinary direction for the client, visit the location to come up with design concepts for the space, and we check on the status of the kitchen.” Then follows a phase of conception before the realization starts, which goes every step of the way including “writing the menu for the new restaurant,” Sophia says. The Lab puts value on the fact that every new project is in alignment with their philosophy of sustainability and a positive working environment, something that might not have been true for each and every kitchen in the past. 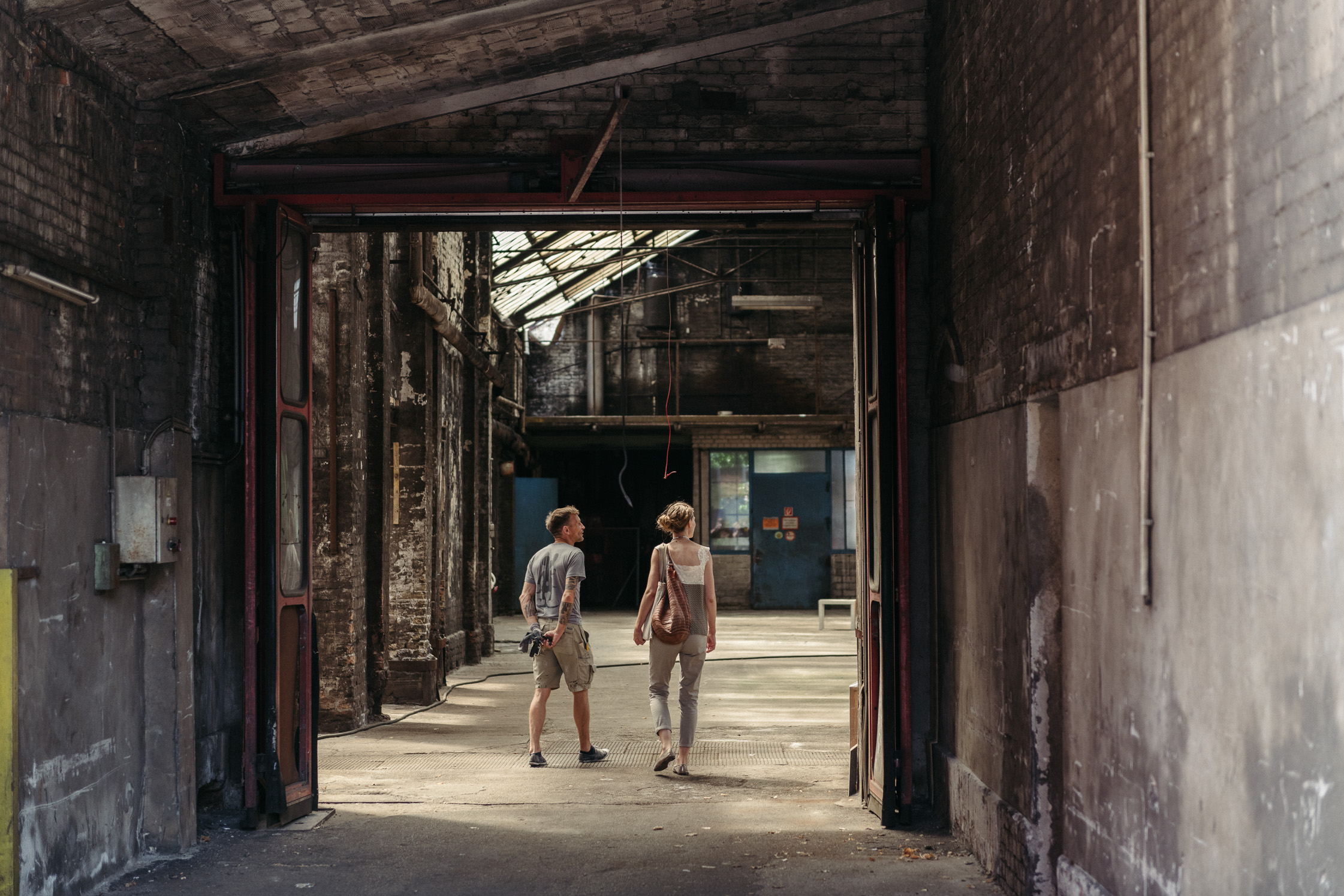 “I spend 30 percent of my time cooking. But this is why the Contemporary Food Lab interested me so much, I’ve always loved the logistic side of things. I’m good at it, pulling the strings in the back, seeing the concept as a whole.”

“I often catch myself thinking I could never do anything else.”

Kitchen culture is something that has become heavily covered in the media in recent years. Slowly people are beginning to question the old-school approach to being continuously yelled at and harassed while they learn and debates on how to change this are held around the globe. Sophia has always felt it important that when she’s putting together a team to hire people that actually work well together. “I want my kitchen to have a positive atmosphere and for those working in it to have good interpersonal relationships. Of course, people are different and I don’t want to, nor do I think it’s smart, to hire the same sort of person, but I have a gut feeling about people that I rely on.”

Sophia points out that the team dynamic hugely factors into how the work environment plays out: “As a team, we spend a lot of time together and it’s a physically demanding job where we work together very closely. In the best case, people get along and there’s a nice balance. One person who plays the class clown helps; it keeps everyone’s spirits up.” The dynamic within the team, of course, is highly driven by the individuals who make up that team. You might not be the class clown right from the start, it’s also a position you have to work your path into. “We’re a young team and there are a handful of staff who have a little bit less experience but they’re eager to learn,” says Sophia. “That dynamic, between people who are hungry for knowledge and others who are willing to teach, is a huge bonus.”

Because Sophia takes care of so much more than the kitchen, she simply does not have a lot of free time. Many chefs have Mondays off, the day that restaurants traditionally close, but that’s the day where Sophia will take care of the logistics and head into the office. When she does spend time away from her job, she goes out to eat. Simple as that. When we meet, she has just returned from a short trip to Vienna, where she had gone to visit several restaurants.

Not many people are suited to a life like this, one where your job so clearly defines your life. But Sophia loves it and seems to get her energy from exactly that. “In the beginning, it was simply cooking. Now I probably spend 30 percent of my time cooking. But this is why the Contemporary Food Lab interested me so much; I’ve always loved the logistic side of things. I’m good at it, pulling the strings in the back, seeing the concept as a whole,” she says. And yet, it’s the mix of challenges that keeps her going and her ambitions growing: “The things that not many people enjoy, I truly love. Of course, if you’re standing in the kitchen and you’re joyously exhausted after a physically demanding evening but everything went well, that sense of gratification is so immense that I often catch myself thinking I could never do anything else because this is what makes this job so great. But I realize that I don’t want to be working in kitchens my whole life.”

Which is where a bigger plan comes into play, Sophia wanted to become a chef to travel and learn from different cultures and food. She would love to cook elsewhere but, for now, her roots are firmly planted in Berlin’s soil. The Contemporary Food Lab has plans for expansion, perhaps more restaurants and generally becoming accessible to a larger amount of people. In the best case, the Lab goes international and Sophia’s ambitions will once again seamlessly merge with that of her employer’s.

This portrait is a collaboration between Freunde von Freunden and Siemens Home Appliances. This portrait is part of the series Culinary Encounters in which we discover the culinary world through the lens of contemporary up and coming chefs. Developments in contemporary kitchen culture reflect upon how chefs work in their daily professional environments. Visit Siemens Home Appliances for more, learn which dish Sophia Rudolph prepared at the FvF Friends Space and stay tuned for further culinary portraits in collaboration with Siemens Home.

For her debut album, the only person Sasami needs to please is herself