To provide you with a better picture of who the people are behind Freunde von Freunden, we want to introduce you to our international team on a regular basis. Some of them have been with us even before the very start of FvF and others joined the crew along the road throughout our captivating global adventures.

Ilan Rosenblatt is one of our longtime contributors from Paris. As Director of Photography, he is responsible for many of our portraits and client productions in France. We first met Ilan during his extended stay in Berlin in 2003, when he was working at Rio, Berlin’s legendary Club in Mitte. Shortly after he moved back to Paris we began to shoot some fantastic FvF videos and photography-based portraits with him. Ilan has introduced an inspiring mix of guests to the magazine through his Parisienne and Berlin-based contacts. Take a look at his work with artist Akroe, architect Joseph Dirand and most recently director Alexandre Courtès. 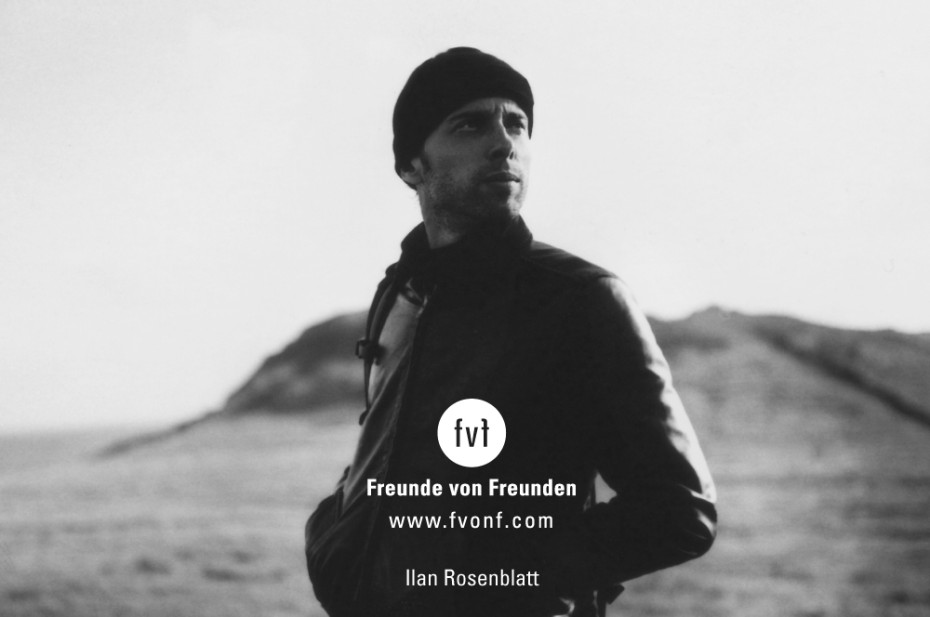 What’s your favorite daily ritual?
Taking my son to the kindergarten and spending five minutes surrounded by 2 year old children: This experience is stronger than LSD.

What do you do when you are not working with FvF?
I work with timelapse photography and shoot as many photos as I can with my macro 100mm lens.

Where do you go when you want to relax or get inspired in your city?
To relax I go out of the city; it’s quite impossible to relax in Paris. Having said that, I get a great feeling by driving my scooter throughout Paris. Inspiration is on every corner, every terrasse de café. I spent a lot of time on terrasses, way too much.

How has technology influenced you?
I worked some time in a post production company, Machine Molle. This is where I discovered the infinite possibilities of 3D and other post-production effects. Le “champs des possibles” (field of possibilities) becomes infinite with FX and gives you a lot of ideas…

Best travel memory?
Mexico. I was in San Cristobal during the elections of Vincente Fox back in 2000, it was the first time in 70 years that the power changed hands. I guess it’s now worse than ever in Mexico, but I remember that special day, the crowds were full of hope.

Your latest artistic discovery (musical, art or design)?
This video by Nowness.

What was the last great meal you ate & where?
A very strange Chili con carne revisited by the crazy chef from my favourite spot in Paris to eat or/and drink, “les deux amis”, Rue Oberkampf 75011.

What’s your favorite website?
Brain Magazine can be hilarious sometimes, but only for the french audience.

Who would you like to see featured next on FvF?
Jackson and his computer band, aka. Jackson Fourgeaud. I promise you I will get him on FvF in 2013.

What’s the biggest misconception people have about Paris?
The war between Paris and the rest of France. Paris is made out of a majority of people, who were not born in Paris.

If you wouldn’t live in Paris, where would your ideal home be?
Teotihuacan, Mexico. I would built a house on the top of one of the pyramids.

Ilan was kind enough to provide us with his favorite French tunes on his FvF Mixtape #16. We are very much looking forward to be working with him in 2013. Thank you for answering our questions.

Berlin Design FF Community Profiles
FF Community
Back to overview
We use cookies on our website to give you the most relevant experience by remembering your preferences and repeat visits. By clicking “Accept”, you consent to the use of ALL the cookies.
🍪 SettingsAccept
Manage consent